This study is devoted to American volunteers incorporated April 20, 1916 in a unit called the “American Squadron “ which fought wearing French uniforms until December 1917, at which time, by the reason of the USA’s entry in the war, it become the USA 103rd Pursuit Squadron.

In the middle of 1916, ten American pilots volunteers in the French Air Force, joined up to form a squadron under the command of major Thenault.
The Squadron was named after La Fayette, with the head of a Sioux as its emblem and a baby lion as mascot.
This baby lion, named Whiskey, was purchased from 500 francs from a Brazilian dentist who has recently come from Africa and placed an ad in the New York Herald Tribune to sell this lion. The pilot Thaw took it upon himself to bring the animal to the Squadron. Thaw arrived at Gare de l’Est with ” this big dog ” on a leash, bought a special ticket for the ” dog “, and boarded the train. Up to that time he had no difficulty. But then came the train conductor who looked over this unusual passenger with suspicion. ” What is that beast ? ” he asked. ” It is a dog from Africa ” answered Thaw. At this very moment Whiskey as if resenting such a disgraceful introduction roared in fury and showed his claws. 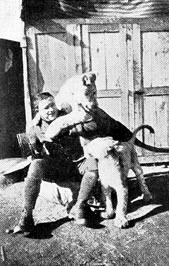 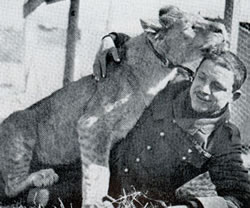 ” But this is a lion ! ” screamed the conductor. Some women having caressed the animal while admiring his sweetness ran out of the compartment screaming.

In order to join the Squadron, Whiskey has to travel in a luggage train. Later a young female lion named Soda joined Whiskey. Their preferred food was a soup made of meat and bread. Soda was always more wild than Whiskey : a mystery of the feminine soul ! 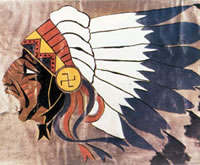 In naming their Squadron La Fayette the American pilots naturally wanted to recall the deed of the French volunteers who has died for the independence of the United States.

One after the other, the American pilots gave their live for France.

Thus disappeared in aerial combat the Cadet of the Military Institute of Virginia Kiffin Rockwell who won the first victory of the Squadron ; the globe-trotter with a hundred professions, Raoul Lufbery who was the Ace of the Sioux ; Dennis Dew, the great and intelligent lawyer ; the student Sidney Dew, broad of mind and shoulders ; Andrew Campbell the engineer with a smiling face ; the ” two friends ” Benjamin Walcott with an impetuous personality and James Doolitle, always calm, circumspect and determined ; the former student of the University of Harvard, Norman Prince, with the sarcastic mind ; Joseph Wilson, nicknamed the ” Stubborn ” ; Cyrus Chamberlain, kind and moody ; the systematic William Dugan taking everything seriously ; the former conductor of ambulances, James Mac Connel ; the architect Victor Chapman ; the willing David Peterson and Norman Barclay ; Harry Johnson stubborn and silent ; Elmer Taylor who has sworn he would not die in his bed ; the timid Wallace Winter ; Herold Willis with a clear and healthy laugh ; Douglas Machmonagle, unmoved in adversity ; James Baugham the cheerful person ; and last, but not least, simple and modest the grandson of our first ambassador to the Convention of the United States, citizen Gennet, who at the end of his mandate, remained in the United States and was naturalized.
There is a long list of those who died not forgetting the helping hand La Fayette gave to their ancestors.

The Ace of the SquadronThe Ace of the Squadron was Lufbery.Born in France, American by his father and French by his mother, Raoul Gervais Lufberywas nearly thirty years old at the beginning of the war in 1914.
His childhood was difficult. Poor and probably condemned to poverty for the rest of his life, Raoulleft primary school at the age of thirteen after received his certificate. Having finished his pleasant studies he ended the pursuit of a calm and well organised career ! But strong with muscles and nerves, the youth was destined not to stay in one place very long. He was seen everywhere, always on the lookout for adventure, courageous, overconfident and richer with ideas than money. In turn, he was a messenger, notary junior clerk, salesman, commission agent (shipper), jewellery clerk, laborer in a tire factory, railway workman, docker, hospital attendant, railroad conductor, waiter, deck sailor, steersman’s helper, head cook on a sailboat, member of a travelling show, fortune hunter, elevator boy; he was able to adapt himself and was ready at any time to do anything honest to earn his living. 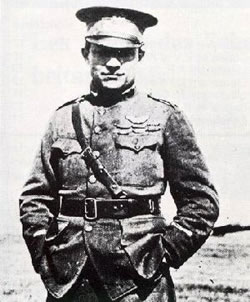 Raoullived seriously but with difficulties because of his personality, his mind a bit baffling and refusing to yield obligingly to the magnates of business or manufacture whom he calls “puppets”, for Lufbery did not generally make a point to place himself next to those who succeed. It was thus that he travelled through France. He sailed from Marseille; he led the life of a nomad in Algeria, later he went to Tunisia; then to Egypt which fascinated him; and Turkey which attracted him. He found a position as secretary in Constantinople. But he was bored. Disgusted with the prosaic life, he resigned and left for Greece and a sojourn in Bulgaria. He was not one for remaining idle; just for experience he crossed into Rumania, Austria and Bavaria. He found a good job and seemed well settled, but an opportunity arose and he gave up the job, and with good references, he left for Hamburg. Finally, but late, he went back to his own country, America with ideas of conquest. Where would he find his need of activities ? His longing for changes took his as far as Mexico, New Orleans, Canada and California where, while travelling, he offered his services to a merchant. Lufbery ended the first part of his odyssey by enlisting in the Marines in New York for station in the Philippines.
On 2 August 1914, without having anticipated not wanting it, France was at war. Luftberrywho was endlessly enthusiastic, volunteer in the French Military Air Force ! He received his pilot licence at the Instruction enter of Chartres, and in May 1916, he was assigned to the La Fayette Squadron. Victories

On 31 July Lufbery was in combat with his first German plane, a Fokker, which he shot down. This first success gave him a fighting spirit, shooting down two Albatros on 4 August, and four days later a bomber piloted by Lieutenant Schneider.

On 12 October, Lufbery won his fifth victory entitled him to be placed on the official honour list and received a Military Medal. If he was looking for fame, he found it. The vagabond proletarian, always joking and exploring became a conqueror. His ambitions materialized.

On 6 November, he destroyed the Halberstadt of Lieutenant Gürther. Excited by the bloody game of the fight and absolutely confident in himself, Lufbery attacked on 27 December and in ten seconds shot down the Aviatik of Lieutenant Leffers.

On the 25 January 1917, he shot down the Aviatik of Lieutenant Erdwan.

On 24 April, the Rumpler of Lieutenant Schmidt was destroyed; thus raising his victories to nine; he was continually destroying, demolishing, and shooting down his opposition. The series of his battles calls for sympathy, admiration and stupor. Weeks passed on and the German pursuit planes kept falling.

In June Lufbery received the golden medal of the Aeroclub of Paris and the Croix of Chevalier de la Legion d’Honneur. Distinction well deserved this American, born in Auvergne, the province of obstinacy, has not paid a light tribute to France ! Following such honours, the Ace of La Fayette’s Squadron was going to destroy bigger and better things. Eager and passionate, he fought with equal ability the enemy’s bombers, reconnaissance and pursuit planes.

On the 12 June 1917, the official communiqué listed his tenth victory and a new citation. In the United States, the exploits of Lufbery made headlines. So long in the dark, the name of his globe-trotter became famous and triumphant.

At last, on 2 December, commemorative day of the battle of Austerlitz, the American pilot decided to celebrate with his French friends. And he won his 15th and 16th victories.

On 5 january 1918, Lufbery who had been in constant combat was promoted to major in the American Forces.
Bars and honours ! So as to keep up with his reputation, Lufbery destroyed his 17th plane on 27 April. The battle was difficult and the Ace was practically exhausted. But on 19 May, during a new battle, a bullet hit the gas tank of this plane which burst into flames. Fighting without mercy, Lufbery jumped and fell to the ground near Saint Mihiel, in a small village of Lorraine, and was killed.

His body is resting here. The grief of the American Air Force was also that of the French. In commemoration of Lufbery, whose portrait still hangs in he conference rome “watching” the Veterans of the La Fayette’s Squadron have formed an association wich has no regulations, but a password : “The Love of France“.

During the war of 1914-1918, the La Fayette Squadron, as general Paquier remarked, not only won some two hundred victories, but materialised Franco-American friendship for the first time since the War of the Independence. For this reason the French Command decided to give La Fayette’s name and insignia to a squadron of the Air Forces in peacetime thus safeguarding its glorious tradition.
It was Squadron 23, 7th Squadron of the 35th “Mixed” Air Regiment which became the unit of tradition of the Spa. 124 La Fayette. At the declaration of war in 1939 and following a series of previous reorganizations, the 1st Squadron of Fighter Group 11/5 became the traditional unit bearing the name of La Fayette whereas the 2nd Squadron of this unit became the heir of the insignia and tradition of the Spa. 167 Cigognes Squadron.